To reduce the number of face-to-face interactions with the community and protect our staff and their ability to carry out ongoing essential services, the Derwent Valley Council Offices are open to the public from 10am - 4pm from Monday 24 August for essential visits only.

Council operating hours are still 8.15am – 5pm (Mon - Fri) and Council services can be accessed over the phone, by email or via our website. We encourage all enquiries by phone or email where possible.

Information on the Tasmanian Government and Council's response to COVID-19.

This information includes support available to individuals, business and community organisations including grant funding and mental health support and where to access further information around the pandemic and Council services.

We'd like to introduce your new Derwent Valley icons. They represent local stories we heard when we talked to the community about the area and what it meant to them during the brand consultations. Each icon has a set of four logos in each of the nine colours.
Please meet The Cherries, The Tiger, The Fagus, The Platypus, The River, The Swan, The Hops, The Trout and The Eucalyptus.

THE ICONS [and the stories that inspired them]. 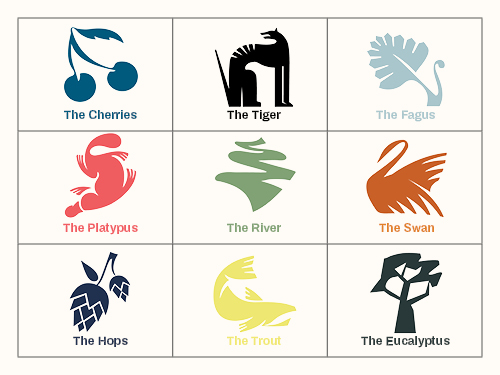 Did you know that cherries are some of Tasmania’s most popular exported items?

Or that they say Derwent Valley cherries are individually wrapped in gold leaf and sold in Japan for $50 each? They’re so valuable that local producers keep two helicopters on standby during winter and use them to keep off the frost on the coldest nights. Only in the Derwent Valley can a cherry become the new gold standard.
These cherries and logos are shown here in Mountain Blue which is inspired by the colour of mountains in the distance, when seen from various locations throughout the valley.

Some say the Tasmanian Tiger is extinct.

It’s widely accepted that the last Tiger was trapped in Maydena before living his life out in Beaumaris Zoo. But speak to someone from the upper reaches of the valley and they’ll tell you otherwise. Apparently, in the forests you can often hear their high-pitched screaming at night... Only in the Derwent Valley can a supposedly extinct animal become a nuisance.
This tiger and logos are shown here in Fagus Orange which is inspired by the striking orange colour of the Fagus as it prepares to drop its leaves for the winter.

Swansongs aren’t just final performances, they can be first impressions as well.

They’re the welcoming party for visitors coming this way from Hobart. And no finer first impression was there than witnessed by the famed Irish composer, William Vincent Wallace. It was 1838, and young Bill was gazing over the Derwent River from his room at The Bush Inn. Suddenly, a flock of swans before him banked and broke out into song. So moved was Bill by the scene, it inspired him to write ‘Scenes That Are Brightest’. And to this day, when the swans sing together the Valley becomes an opera.
This swan and logos are shown here in Falls Mist which is inspired by the mist that sprays out from Russell Falls and Horseshoe Falls in Mt Field.

The Derwent Valley is known as an enclave for artists. And there’s none more colourful and flamboyant than The Fagus.

Tasmania’s only cold climate winter-deciduous tree, it lives deep within Mt Field National Park. It changes the colour of its leaves for just a few weeks a year, bringing hundreds of groupies to worship at its tangled roots. Only in the Derwent Valley can something so flamboyant be so reclusive.
The background to the Fagus and logos shown here is in River Blue which is inspired by the colour of the Derwent as you look into its depths from the New Norfolk bridge.

As you nurse your beer, take pause and give thanks to one Ebenezer Shoobridge.

Not many people do - in fact, not many people know who ol’ Ebenezer is at all. But we do. Because Ebenezer’s the godfather of Derwent Valley hops, and with over 70% of all Australian beer brewed using hops from the Valley, possibly Australia’s greatest ever hero. Only in the Derwent Valley can a farmer’s son turn a weed into the world’s favourite flower.
The hops and logos are shown here in Dark Sky Black which is inspired by the skies over Strathgordon and Lake Pedder. An application has been made for this area to be accredited with official Dark Sky status due to the lack of light pollution.

It’s said the River Derwent has the purest water on Earth.

It’s what makes our platypus so big and trout so plentiful. Many travel from far and wide to sample its fabled powers - some say that it even holds the secrets to eternal youth. We’re not so sure about that, but what we do know is that it’s a terrible gossip. Up and down the Valley, secrets are babbled and laid bare like a rolling news report. Only in the Derwent Valley can a river be so clean yet harbour dirty secrets.
This river and logos are shown here in Willow Green which is inspired by the weeping willow trees found along many waterways and in parks throughout the valley.

If you’ve gazed into the mighty Derwent or waded into the Tyenna, you’d know the waters are overflowing with trout.

Perhaps too many trout. It’s been known for kayakers to be marooned on islands of silvery scales. For locals to walk across the river as if on land. For fishing competitions to be cancelled (because where’s the competition if everyone wins?). Only in the Derwent Valley can you catch a trout by accident.
The trout and logos are shown here in Cherry Red which is inspired by the blushing skins of the cherry as it enters the later stages of ripening.

Some trees grow tall. And then there’s the Derwent Valley eucalyptus.

Some argue they’re the tallest trees in the Southern Hemisphere and that they reach out and pluck things from the sky. This may be why National park and Maydena were hotspots for UFO sightings in years gone by; low flying UFOs were escaping the lushness of the branches.  Only in the Derwent Valley can one climb a tree and touch the stars.
The Eucalyptus and logos are shown here in Eucalyptus Green, inspired by the dark olive green of the crowns of the trees.

The platypus here are big, some say the biggest in the world.

Why so big? That’s something we ask ourselves often. Maybe it’s because of the pure waters of The Derwent? The fertile banks? Or maybe it’s just some weird hangover from the time of the dinosaurs whose bones can be found buried throughout the valley. Either way, they’re everywhere. Sliding across ski fields in Mt Field, bumbling across roads and bringing traffic to a halt. Only in the Derwent Valley can the weirdest animal in the world be that little bit weirder.
This platypus and logos are shown here in Trout Yellow which is inspired by the strip of yellow running along the side of rainbow trout found in the local rivers.

Every good brand needs a good ‘made in’ logo. ‘Unquestionably Derwent Valley’ is ours.

Whether it’s on a raspberry punnet, ceramic pot or a beer label - this logo will be a sign of quality, and will let the world know it’s from here.
The full range of icons shown here is available for use and users can choose from Dark Skies Black, Mount Field White or Cherry Red. 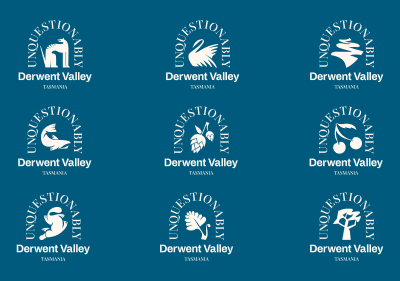 Have you noticed something a bit strange about the stories behind our icons? Do they seem like they’re a little over the top or not quite right as you know it? That’s because they’re what we like to call ‘Derwent Valley True’.

Derwent Valley True is a bit like the story you hear down the pub. It’s often a bit bigger, taller or scarier than it actually was, but there’s always [well, usually at least] a grain of truth in it.
It’s what makes the Derwent Valley home to a whole raft of storytellers and we wanted to make sure this was captured in the Brand. 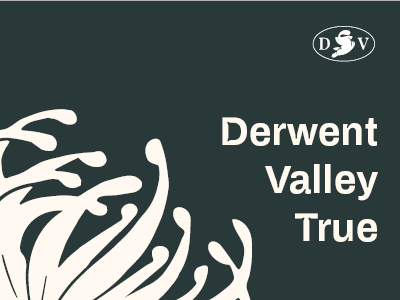 Now this is where it gets really exciting.
As an extension of our icons and stories, each character has its own accompanying illustration. These are inspired by classic book covers, and contain elements that visually tell each unique story.
These can be used in a number of ways through the brand, from menus to local guides, coasters, posters or books themselves.
Each illustration is available in every colour so, just like the rest of the brand icons and logos, you can pick which one suits you and your product or business. Are you as excited about the Derwent Valley Brand as we are? Do you want to use it?